In first three quarters of 2017, The total external trade of China grown quicker, trade structure is further optimized, motivation conversion is accelerated, stabilizing trend is firmer. From January to September, China’s total foreign trade is 20.29 trillion CHY, 16.6% higher as this time last year. 11.16 trillion within is export and increased by 12.4%, while 9.13 trillion is import and increased by 22.3%. China got 2.03 trillion surplus, which declined 17.7%. Under such circumstance, our hardware industry’s overall external trade shows a steady pick-up trend, export and import continually peaking on each month of that three quarters. The import amount also the growth is accelerating. 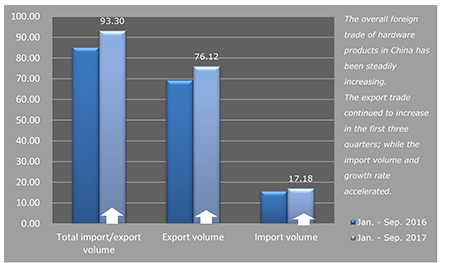 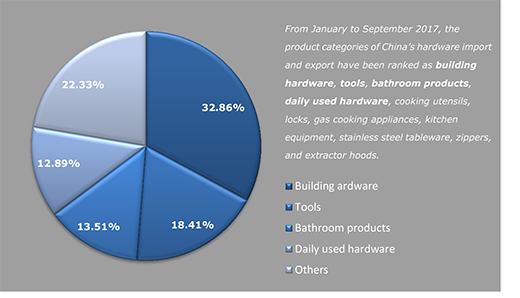 From January to September 2017，most of hardware export was achieved in Guangdong, Zhejiang, Jiangsu, Shanghai, Shandong, Fujian, Hebei, Tianjin, Liaoning, Beijing and other area. 95.51% of total hardware exports are achieved by those areas. As to import, it’s mostly concentrated in Shanghai, Jiangsu, Guangdong, Beijing, Shandong, Zhejiang, Tianjin, Liaoning, Jilin, Fujian, etc.，The import of areas above covered 89.62% of the total.

With the further developing of Belts and Road Initiative and the steady progressing of international capacity cooperation, China’s foreign trade gained an expansive space for sustained development. in first three quarters, China’s hardware industry achieved 23.733 billion USD trading with the countries along the Belt and Road route. It covered 25.44% of the total hardware foreign trade and had a 7.40% grew comparing with the same term last year. This situation severely influenced the external trading of the whole industry.

Among all the Belts and Roads trade partners in the first three quarters, hardware was mainly exported to Vietnam, India, Russian Federation, United Arab Emirates, Indonesia, Thailand, Singapore, Philippines, Poland and other countries and regions. Their proportion in total export to Belts and Roads countries was 61.98%. Except Singapore had an 8.9% decrease, other 9 countries and regions had a positive development. Vietnam, India and Russian Federation’s export grew faster than all other countries, their grow figures are 15.14%, 10.66% and 24.90%. In hardware export area, 48 out of 64 Belts and Roads countries kept a positive growth in the first three quarters. Laos and Mongolia’s export growth is the fastest, both of them grew over 130%.

Since 2017, at abroad the global economy moderately growing and the demands of global market is keep reviving, at home on one hand the effect of series promoting stable growth and adjusting structure of foreign trade policies that put forward by the State Council are gradually appeared, on the other hand with the deepening of the supply side structural reform in foreign trade field, a large number of enterprises from the supply side exerting force, adhere to the innovation drive, speed up the power, adjust the structure, focus on cultivating technology, brand, quality, service, standards as the core of the new foreign Trade competition, enterprise innovation and international competitiveness enhancement, product value-added and brand influence further improve. The business environment of new trade development is improving and the export growth rate of cross-border electricity quotient and market purchase is faster than the overall growth rate, and the new impetus cultivation effect is obvious. With all those factors, China’s overall hardware foreign trading is continue stabilized and even grow positive. The hardware bilateral trade with major trading partners such as Asia Pacific, EU, BRICS and the United States continues to rise faster than 10%.

Next, the industry should revolve around the target of Government Work Report, firmly establish and carry out the new development idea, take Belts and Roads Initiative to lead the opening-up, continue to strengthen the cultivation of new foreign trade, strengthen and upgrade the traditional advantages of trade, and actively cultivate the new advantages of foreign trade competition. It is expected that the overall situation of foreign trade in the fourth quarter will continue to be positive.